Eric always makes a joke whenever we climb a dirt bike or whenever we are on a trail with someone who has not heard it before. The joke is a little bland now from overuse. Lol but it’s always funny when he says it: “The question of ‘Can I ride my dirt bike on the road?’ is not something someone thinks of until you are fined or detained. I know a guy who asked a policeman the reverse of this question and got double fined. He asked, “Can’t I ride MY dirt bike on the road?!” Not funny, is it?

But seriously, can you ride a dirt bike on the road? I would say yes, and no! Yes, because it is a bike and bikes are meant to be on the way or anywhere the rider chooses in his sole discretion but NO because a dirt bike is not designed for the traffic and you may have to modify the bike to abide by specific street traffic rules.

Why is it a Thing?

If you know bikes well, you would not need anyone to tell you that dirt bikes are very much different from street bikes and multi-cylinder gas bikes. Naturally, dirt bikes like the Honda CRF 450L are made for racing, and the street would not have that except in Hollywood of course! So if you have a dirt bike and you want to ride out in style without any complications, you may have to do a few modifications to your dirt bike and get it registered and get a license as a road user, and then you would not be in trouble.

First, being in traffic means that you are subjected to traffic rules, which can sometimes mean that you have to abide by the freeway speed limits of some parts of the country. A dirt bike is made for freedom of bursting out! If you force a dirt bike to this low key profiles, it may hurt it in the long run. However, there are ways and means. Many of my friends have done this transformation of their dirt bikes, and they have registered to get them licensed for the road. I am not a lawyer, and so it is advisable that you research road laws that govern the uses of bikes on the road in your area to make the last decision.

How to Make Your Dirt Bike Street Legal

As I said earlier, getting the license to turn your dirt bike into a street-legal bike depends on your area. For example, if you live in beautiful Southern California, and you plan to use your dirt bike on the road, you might have to carry your wheels around because the laws over there are so strict that — Don’t even think about it!

However, almost everywhere else (except where we don’t know) you can do this in so far you follow the requirements. Even though the requirements to modify your dirt bike for dual purpose varies from state to state, we will map out the fundamental necessities in this post so that you know what you are up against. But you will need to research on your own to know the basic requirements for getting a license for an off-road bike on the streets. Once you get a license, you can go anywhere you want on your dirt bike as long as you are in the jurisdiction where the license works.

What Do You Need?

The modifications are straightforward and can be done by anyone who has experience with bikes or automobiles generally because most of the extra parts which you would have to add by bolting them on. We will likewise discuss how you can get these parts. Now let’s say you have a Yamaha YZ 125 that you have to modify, here are a few of the things you must get: 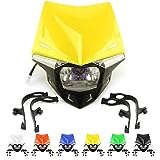 The first thing you must get for your dirt bike is a DOT-compliant headlight that you can easily switch from low to high beam. You would need it in traffic even in the day, especially when it is foggy. The best way to go about this is by getting an LED headlight installed on the bike. This way, you would use less energy and place less stress on your bike. 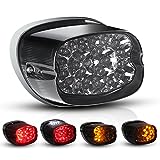 The tail light is essential because, in traffic, you must be able to alert other drivers of when you are slowing down or parking. It also allows you to be visible from behind. If you install this correctly, it will be connected to a battery and must have buttons on the front brake lever for you to engage it easily. A good and cheap button is BanjoBolt. Like the headlight, you should get a good LED taillight for your Yamaha or whatever dirt bike you plan to modify. If you have a drum brake, you may have to get a mechanical switch.

In many states, having two side mirrors is compulsory, while some states require at least one. This is to ensure your safety in traffic. Avoid buying mirrors that would not stay in. Use something that is of good quality to keep you safe on the road.

Though some states require only that the rider uses hand signals as opposed to turning signals, it is compulsory in others. Hence it is advisable to buy flashing yellow lights because that is more effective, especially at nights.

Some states don’t find anything wrong with the hub and knobs on dirt bike tires, but some states are like, No! This is more reason why you should do good research before setting out.

Another one of those requirements is a working horn.

Other requirements (which vary from state to state) include:

How To Get These Parts

These parts are easy to buy and install, and they are not even expensive. You can buy them one by one at a nearby store. Or you could use some online dirt bike converter to do all the work for you according to the requirements of your location. My friends would always talk well about dirtlegal.com. I’ve not personally done any job with them, and so I will not review them, and we are not even in any way related to this website. Further, if you want the parts shipped directly to you, you can click on the links below to check on Amazon for highly competitive prices by clicking on each of the items in this post. Scroll up a little and click on any of the parts you’d like to get first on Amazon.

We give you the full measure of the freedom and joy that a double treat of having a dual purpose dirt bike brings. Enjoy! Remember to check out more cool tips in this category.